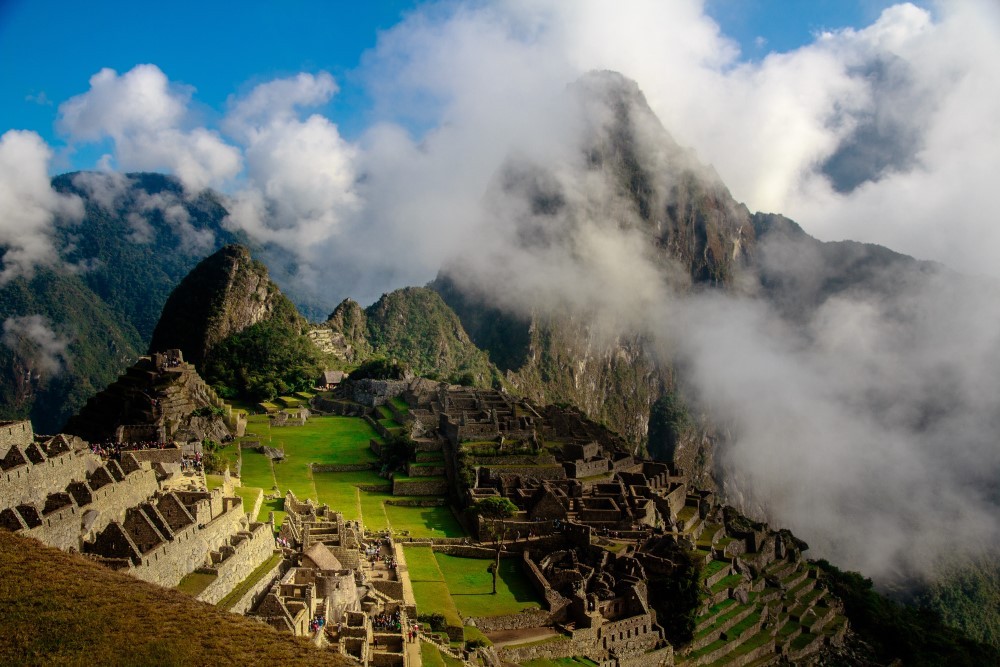 Machu Picchu is Peru’s tourist destination by excellence. In 1983 was declared Cultural Heritage of Humanity by UNESCO and in 2011 entered the list of the Seven Wonders of the Modern World. But how and when this old Inca city was built?

The archaeological site of Machu Picchu is one of the best known worldwide. Located on the top of a massif known as the Batolithic of Vilcabamba (between the Machu Picchu and Huayna Picchu mountains), at 2430 meters above sea level and about 80 kilometers from the city of Cusco, the ancient Inca city is considered a masterpiece of both architecture and engineering.

Its name comes from the Quechua language, where the union of both words means “old peak” and it received this name from one of the closest mountains after its “discovery” in 1911.

Furthermore, the sanctuary is surrounded by legends and stories which gives the place a certain air of mystery. Do you know when and how Machu Picchu was built? We will tell you all the details below. How and when was it built

For many years there was some doubt as to when and how this city was built, but in 1987 the carbon-14 analysis revealed what the origin of this impressive construction was.

Machu Picchu and the Inca era

Archaeological studies have estimated that Machu Picchu was built during the 15th century. Pachacuteq, the first Inca emperor, after conquering the city of Picchu, ordered the construction in 1450 of an entire luxury urban complex for the aristocracy of the Inca era. Next to the urbanistic complex, it would also be included a mausoleum to lodge the remains of the monarch Pachacuteq, although in the end it was also used with ceremonial character.

The place in which the Inca city is located was thoughtfully chosen. It is surrounded by cliffs of great importance and luscious forest, which allowed not to be seen by strangers. Also, the city had only one entrance and therefore did not require many warriors to protect it.

As for the inhabitants, it is estimated that between 300 and 1000 persons lived in Machu Picchu, all belonging to the descendants of the Inca monarch. The valley was inhabited by agricultural sectors and administrative centers, which provided food for the population of Machu Picchu.

After the death of the Inca emperor, the whole city passed into the hands of his descendants (what is known as “panaca”, a special social class). Then, a new era began ruled by Tupac Yupanqui and after him, Huayna Capac until 1529.

How Machu Picchu was built?

The Inca city of Machu Picchu is, without a doubt, a true work of architecture and engineering. Despite having few tools, thanks to their knowledge, the Incas managed to create hundreds of terraces that held up the walls of granite, a particularly hard material. Thanks to their drainage system, these walls remain solid long after their construction, which demonstrates the ingenuity of this civilization. But why carry out this work in such a complicated place? A geo-archaeological analysis by Rualdo Menegat of the Federal University of Rio Grande do Sul (Brazil) has determined that the Incas built Machu Picchu on a network of tectonic faults intentionally. The fracture predisposed the rocks to break along the planes, which reduced the energy needed to carve them. On the other hand, the fractures predisposed the meltwater and rainwater to be channeled directly to the place where it is located. This spot also avoided the risk of avalanche and served as a defense against the Chanca culture, which was warlike.

Despite what we have thought for so long, the strategy of the Incas has allowed its conservation during the five centuries it has been in existence. A testament of incredible techniques that put in relevance the advanced knowledge of this civilization.

The rediscovery of Machu Picchu

The “rediscovery” of the so-called “lost city” of Machu Picchu was assigned in 1911 to the American Hiram Bingham. Although it is said that Machu Picchu was never “rediscovered” because the locals knew of its existence, this is the most told story of how he made the importance of this place known.

The explorer and archaeologist left Cuzco with the aim of finding the Inca city of Vilcabamba, which had succumbed to Spanish invaders in 1572. Following the Urubamba River, he reached a mountain where he found the white granite ruins hidden among the vegetation. Although at that time he thought he had found Vilcabamba, the Inca city located between two mountains was the city that was named after one of them: Machu Picchu.

Bingham was impressed by this marvel, so he managed to start a scientific study supported by Yale University, the National Geographic Society, as well as the support of the Peruvian Government until 1915. After Hiram Bingham’s research, two Peruvian photographers, Martín Chambi and Juan Manuel Figueroa published several images of Machu Picchu, which made the curiosity for this place grow. It was in 1981 when the Inca city was declared a “Historical Sanctuary of Peru”. Later, in 1983, it joins the list of “Cultural Heritage of Humanity” of UNESCO, and in 2007 it becomes one of the “7 Wonders of the Modern World”.

The Inca city of Machu Picchu receives one and a half million visitors annually, but thanks to its management and conservation, it is not part of the List of World Heritage in Danger established by the UNESCO body. This means that we can continue to enjoy this wonder for many more centuries.

Have you already visited the so-called “lost city”? Tell us what you thought in the comments!