The Monastery of San Lorenzo del Escorial is one of the best-known monuments in Spain, but do you know how was its construction process? Who built it and what’s the history of this magnificent construction?

The construction of the Monastery of the Escorial, also known as the Monastery of San Lorenzo del Escorial, began on April 23, 1563. It is one of the most representative monuments of the Community of Madrid, declared a World Heritage Site by UNESCO in 1984. Today we talk about this emblematic building, how it was built and what was its original purpose.

History of the Monastery of El Escorial

The Monastery of San Lorenzo del Escorial is located 50 kilometers from the city of Madrid, in the Sierra de Guadarrama. It perfectly reflects what was the Spanish “Golden Age”, a historical period with an artistic and political flourishing of the country.

Who built the Monastery of El Escorial

The Monastery was built by order Philip II to fulfill the promise of gratefulness for the victories against the French in 1557.

It was conceived by the renaissance architect, Juan Bautista de Toledo, who had previously worked with Michelangelo in the St. Peter’s Basilica. Later on, Giovanni Battista and Juan de Herrera will join the project.

Finally, in addition to welcoming the order of St. Jerome, the Monastery would also become the eternal resting place of King Carlos V and his wife Isabel of Portugal. As well as the successive Austrias by the decision of Philip II.

Once the construction of the Monastery of the Escorial was finished, being the same in which the battle of San Quentin against the French took place (August 10, 1557), Philip II took it as his residence during the warmest months of the year; especially in the last years of his reign.

The place was then isolated in the middle of nature. It was Carlos III who ordered the later construction of a small city to house the members of the court; something reminiscent of what Louis XIV did in France with Versailles.

Carlos III hired the architect Juan de Villanueva. He was in charge of devising this small courtly city, highlighting above all the House of the Minister of State and the House of Infants.

How was it built the Monastery of El Escorial?

The Monastery of San Lorenzo del Escorial was built on April 23, 1563, in the presence of the religious but without King Philip II. That day, the first stone was laid, already cut, with the name of the architect and the founder engraved on one side. It was not known for a long time where the ashlar in question was located until it was found casually in 1971 while a new kitchen was being built for the monastery. It is a stone 40 cm high where you can read the inscription “Optimal God, watch over this work”.

During the construction of the Monastery, Felipe II came frequently and was responsible for supervising the works and checking that everything was as planned. The king was personally engaged in the works and when he could not go, he left Fray Antonio de Villacastin in charge.

The main material used for the construction of this monument was granite, present in the area. The works of the Monastery came to an end in 1584.

Features and highlights of the Monastery of El Escorial 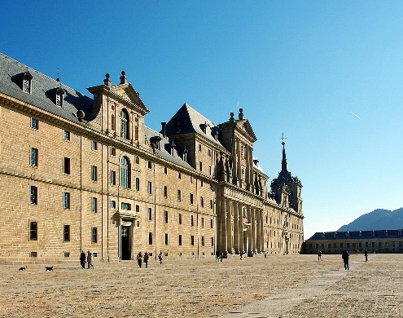 The Monastery floor is rectangular and has a total area of ​​35,000 m2. Towers rise 55 meters high in the corners. The rectangular shape refers to a grill, the object of the martyrdom of San Lorenzo. A gable roof covers the entire building.

The western facade is the main one with 207 meters long and where the access door is located. The facade to the south, meanwhile, has a length of 160 meters and is considered the prettiest.

The Kings courtyard (“El Patio de los Reyes” in Spanish) is one of the most representative and beautiful places of the Monastery. Inside you can find the church which facade is decorated with sculptures of the kings of Isabel, who give name to the courtyard.

In the Basilica the kings of Spain are commemorated, and in addition to having a remarkable facade, the interior has frescoes by Luca Cambiaso or paintings by Juan Gómez or Diego de Urbina among others.

Inside the Basilica stands out above all the Main Chapel, where you can admire the fresco of Luca Cambiaso of The Coronation of the Virgin. You can also find representations of the kings Carlos V and Felipe II in prayerful attitude with the rest of their family.

The Pantheon of the Kings is located under the High Altar and there you’ll find the crypt where the kings and queens of Spain are buried; with exceptions such as Felipe V or Fernando VI, who for various reasons did not want to be buried in the Monastery.

The Royal Library of El Escorial is another of the emblematic places of the Monastery. In addition to finding books of incalculable value; the paintings in the vault, work of Peregrin de Peregrini and Incola Granello, date from 1588 to 1592.

Another of the most prominent places of the Monastery of the Escorial is the Patio de los Evangelistas. It is an interior cloister devised by Juan Bautista de Toledo with a small work by Juan de Herrera and with a Renaissance decoration by Luca Giordano.

The history of the Monastery of El Escorial is an important part of Spain and the world’s history. The Monastery is an impressive work of art that, in turn, frames other masterpieces inside.