The first occidental men in access to the ruins of the city of Petra was a swiss archaeologist called Johann Ludwig Burckhardt that was disguised as a Jordan and discovered that way the old capital of the Nabataeans. Currently, the historical enclave of Jordany is one of the Seven Wonders of the World and it is protected by UNESCO.

The city of Petra goes back to the 7th century, the time of the civilization of the Nabataeans. But is not until 1812 when it was discovered by the occidentals after being abandoned during the Middle Age due to its localization and recurrent earthquakes. In this post, we will tell you how and when the city of Petra was built, and we’ll give you tips for visiting their most famous monuments. 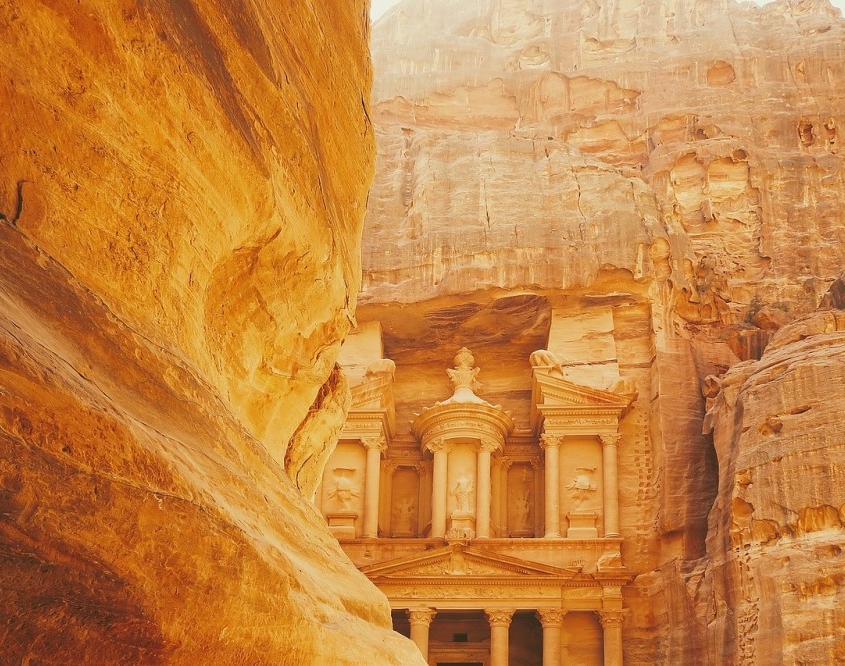 How the city of Petra was built?

The excavated constructions of the stone are not made free will. The Nabataeans built what are now protected monuments based on the movement of the Sun. Thereby, this civilization considered the seasons and the astronomical events to erect their palaces, temples and tombs. In fact, during the Winter Solstice the light enters the Monastery of Petra thus illuminating the pedestal of a deity. In that same moment, the silhouette of the mountain that is located just in front draws the head of a lion, the sacred animal for them. That’s why the design and construction of the cult and worship places of this city are determined by the astral nature of their religion.

The History of Petra

Despite that most of the city of Petra was built by the Nabataeans, the land was inhabited many years before by the civilization of the Edomites. And even though they didn’t build a lot, they are recognized by the discovering and use of ceramics, a tradition that they passed along to the Nabataeans. 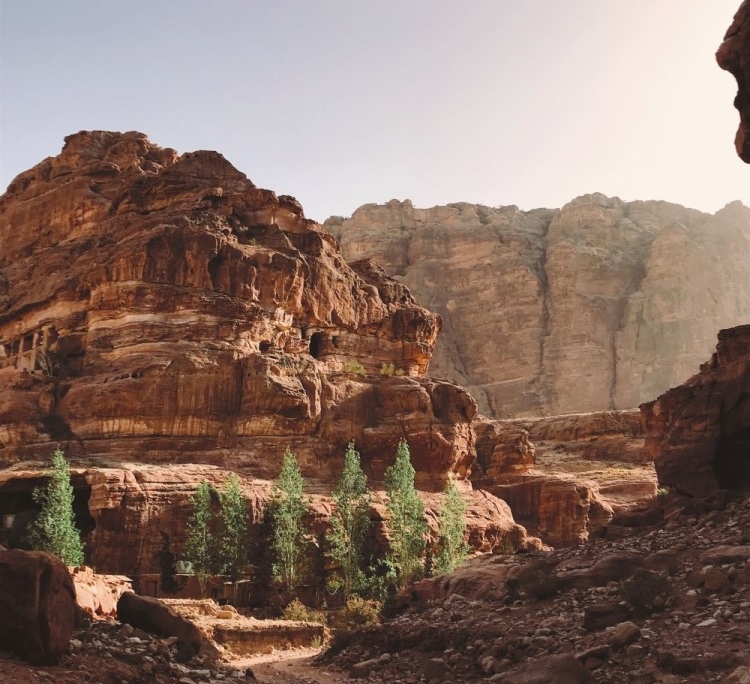 The Nabataeans and the most splendorous moment of Petra

The Nabataeans were Arabic and nomadic people dedicated to mostly commerce. This activity happened in Petra at the end of the 6th century due to the features of the region. Not like other areas of Jordan, Petra had plenty of water, their location was hidden inside mountains, and their limited access allowed the Nabataeans to settle down and turned it into a city with a marked defensive character.

Later, Petra became a cornerstone of the commercial routes that connected China with Rome, the silk and species route.  Due to the large amount of water available and the protection given by the geographical location, it was the perfect place to rest after a long journey. In return for their hospitality, the Nabateans charged something similar to a tax, which allowed them to develop economically.

Their abilities as merchants, their ceramics knowledge inherited from the Edomites, their cognizance of water canalization and their great architectural skills, made the Nabataeans prospered and turned Petra into an exemplar city.

Their architectural evolution is astonishing, they dug rooms with smooth facades in the stones imitating the famous Syrian tombs. They were constantly inspired by the other civilizations who they were in contact like the Egyptians, but they always kept their constructions to the Arabic style. Nowadays, their buildings have become into historic monuments protected by UNESCO.

Petra’s takeover by the Romans

In the year 325, 500 years after Petra become a commercial focus, the Romans took over the control of the city and deviated all commercial routes. The Nabataeans lost all their power and all their wealth, Romans built and modify some elements of the city like the ampliation of the theater and the columns street paving.

Nowadays, three churches had been discovered and it seems to belong to the time when Christianism expanded through the Byzantine Empire. The Urn Tomb was turned into a church during that time. With the omeyas in the year 661 a.C. the city was slowly isolating and after several earthquakes, the city was completely left behind. For this, it was hidden and uninhabited until its rediscovering in 1812. 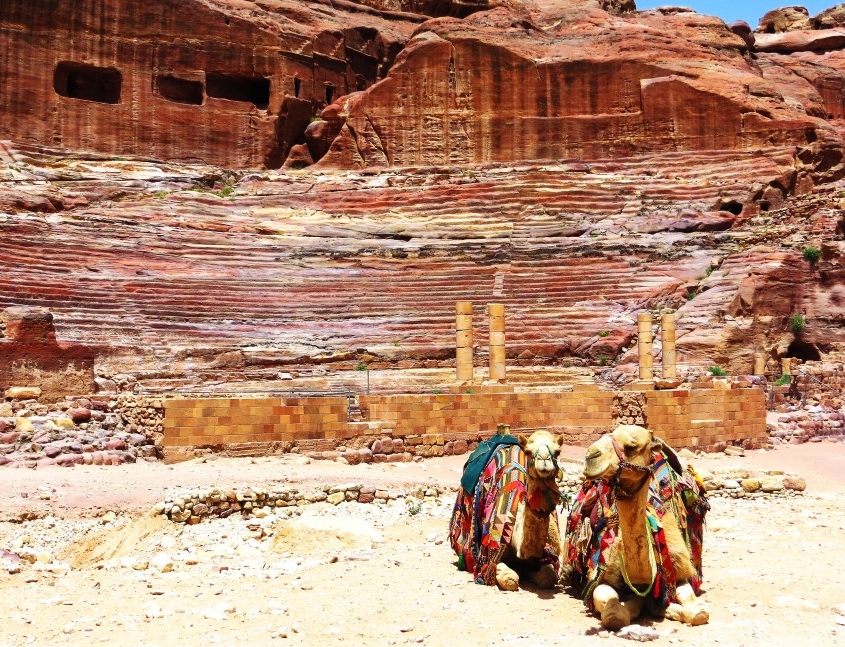 Discovery of Petra by the Occident

In 1812 the archeologist and Swiss explorer Johann Ludwig Burckhardt managed to access the lost city of Petra traveling disguised as an Arab with a guide. His knowledge of the language allowed him to create a false identity calling himself Ibrahim Ibn Abdallah. He was the first occidental Christian in gaze at Petra’s ruins after 600 years of the Jordanians spreading legends and myths about the dangers of the route.

Five years after his death, in 1822, his memoirs about his journey through the Jordan desert and the secret travel to Petra were published and many other Europeans wanted to discover the mystery city of Petra. This is how drawings and engravings arrived in Europe and made the city slowly but surely relevant. Nowadays, the city of Petra is one of the seven wonders of the World and since 1985 is World Heritage by UNESCO.

What to see in Petra? 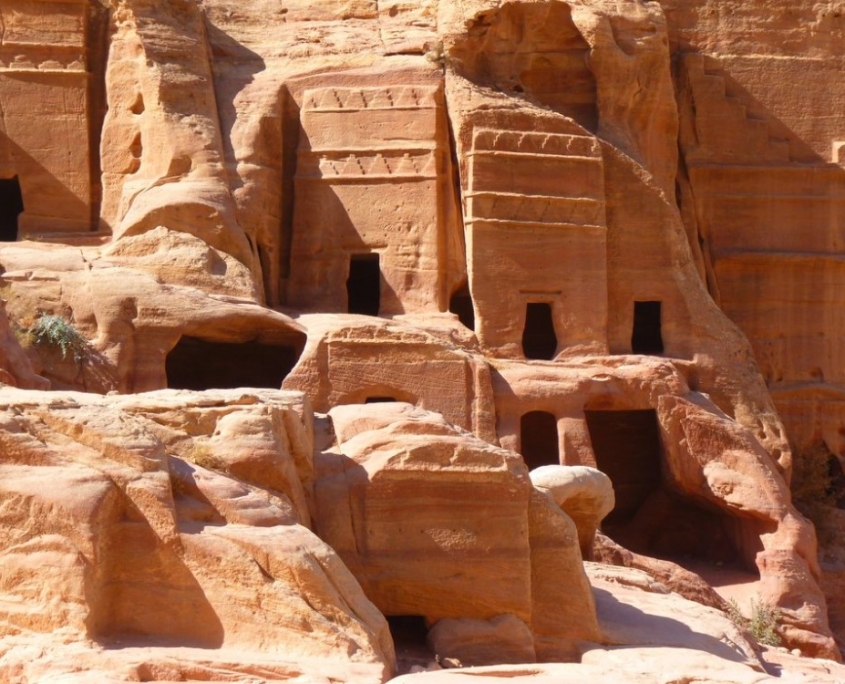 Now that you know how and when the city of Petra was built, there are certain monuments and experiences that you should know about if your planning to visit Jordan or if you are passionate about archeology:

Petra is undoubtedly one of the cities you need to visit to get to know its history and monuments in-depth, and why not? Feel like Indiana Jones for one day. Do you dare to travel to the lost city?