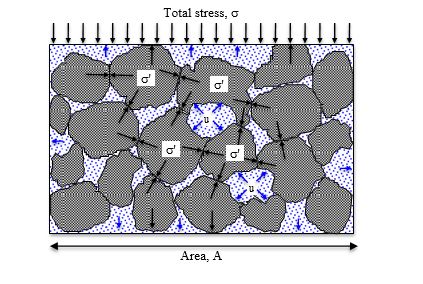 Here you can read a fragment of one of the “Advanced Soil Mechanics” course units, that delves into the efective stress concept in soil mechanics

The loads applied to soil masses are carried by either the solid grains or the water in the pores, and at times by both. With reference to Figure 1.5, as the pore water is loaded (via the applied total stress, s) the pressure within it (u) increases causing the water to flow out of the soil, and the load is transferred to the solid grains (s‘). The flow of water under pressure out of a soil mass is called drainage. The rate of drainage depends on the permeability of the soil. Engineering behaviour involving strength and compressibility depend on the intensity of stresses passing through the solid granular fabric of the soil, i.e. effective stresses.

Karl Terzaghi was born in Vienna and subsequently became professor of soil mechanics in the USA. In 1936 he was the first person to propose the relationship for effective stress. All measurable effects of a change of stress, such as compression, distortion and a change of shearing resistance, are due exclusively to changes in effective stress.

Throughout the rest of your career in civil engineering you will hear the expressions drained and undrained in reference to the state of soil or of loading conditions.

When the excess pore water pressure equals zero the soil is said to be drained. Until that point the soil is undrained.

It should be fairly obvious that granular soils can become drained very quickly. They are said to be in a drained state. Consequently, when doing geotechnical analysis and design for granular soils, we will almost always do a drained analysis, or consider drained conditions.

Clays however have significantly lower permeabilities than granular soils and so drainage in clay takes much longer (years, as opposed to minutes/hours). Because of this, clays remain in an undrained state for a long time, as the excess pore water pressure very slowly dissipates and heads towards zero. When doing geotechnical analysis and design for cohesive soils therefore, we will consider undrained conditions and will do an undrained analysis. We will carry out a drained analysis too since the soil will after all eventually reach a drained state.

Now that we have seen how stresses exist in the ground, let’s look at what happens to those stresses when a load is now applied to the surface of the soil. We need to know what happens in order to (a) establish if the soil will be able to support the applied loading (a bearing pressure problem) and (b) to establish the amount of compression that the soil is likely to experience through time (a settlement problem).

From earlier years of study, we have seen that, for a material like mild steel, the stress/strain relationship is as shown in Figure 1.6 (a).

However, we find that in most soils work, the induced stresses are either low enough to be well below the yield stress of the soil and it can be assumed that the soil will behave elastically (e.g. immediate settlement problems) or they are high enough for the soil to fail by plastic yield (e.g. bearing capacity problems).

Stresses within a soil mass

When a soil is in a state of stress, following for example the application of a load, a 3-dimensional element of the soil will have 9 stress components acting on it: 3 normal stresses and 6 shear stresses (Figure 1.7 (a)). However, many geotechnical structures operate in a state of plane strain: i.e. one dimension of the structure is large enough for end effects to be ignored and the problem then is regarded as one of 2-dimensions, as shown in Figure 1.7 (b).